Managing the Monkeys – The Perception Monkey

While, for some, it may be hard to imagine, management is made up of thinking, feeling, empathizing humans. Shocking, I know, so let’s take a moment to sit with that realization. We are not the “them” in your push-pull analogy. Most management teams are simple made up of people who worked their tails off to get there by doing and knowing all of the jobs they oversee. Like anyone, we, too, are flawed creatures that realize we have a big job to do. And, the better we are at our job, the better things are overall.

But, the “better” in that last sentence doesn’t only depend on the good work of the manager. It also relies on the good work of those they lead. When an employee is struggling, it is our duty to see how we can help them, and when clients and customers are complaining, it is our duty to address the issue – even if that means an uncomfortable, honest conversation about performing better.

From the time of hire, and likely from the time of birth, Camille had a flair for the dramatic. She was commonly overhead in staff lounges or common workspaces vocalizing her opinions with a heavy dose of hyperbole. It seemed that her opinions and thoughts often fed into that “us versus them” mentality and were meant to rile anyone who listened.

For some of her colleagues, avoidance was the best solution. They wanted to enjoy their work and not get caught up in drama. Some colleagues fed off of her behavior or found it amusing enough to participate in. Client reactions to Camille were an equally mixed bag.

As Camille became more comfortable in her position, she became increasingly passive-aggressive in the way she delivered her opinions to everyone, co-workers, managers, and customers. The humor that once made colleagues smile as they passed her in the hall was replaced by sentences prefaced with “Well, I think you should…” It was as though she felt that everything was personal or a personal comment on her and she needed to defend her thoughts, processes, actions, or reactions.

This behavior, coupled with Camille reputation of being the “late” or “unprepared” one in client feedback was becoming an issue for the department. All-in-all, Camille was a good employee, but the patterns were too frequent to ignore. Camille’s manager, Sharon, was a friend and former colleague, so she tried her best to look the other way when Camille was on one of her many tangents. Similar to events of the prior year, Camille had periods of weeks in which she did not arrive on time or prepared for several meetings, leaving clients waiting and other staff scrambling to cover for her. At this point, many were feeling frustrated and many clients were vocalizing their feedback, so Sharon’s boss, Jacqueline, stepped in to address the patterns.

She asked Sharon what was being done to address the situation and insisted that a meeting be set with Camille. Sharon was noticeably hesitant to confront Camille. Even though Sharon was aware that this behavior was common with Camille and that she had been placed on warnings in the prior year, Sharon still didn’t accept the fact that this was a pattern and it was having a negative impact on others in the organization. She was only thinking of Camille’s position.

In an effort to help Sharon prepare for the meeting, Jacqueline had run year over year client feedback data, which showed that Camille was the only employee who was consistently rated below average month over month. She had shared this with Sharon in an effort to help her see the patterns. She also reminded Sharon of the prior warning on file.

The day of the meeting, Sharon began the conversation by showing Camille her client feedback and the many negative comments they wrote. Camille, in her usual dramatic flair, acted shocked and immediately began to defend herself. This put Sharon on guard, as her shoulders dropped and she backed up in her chair. Camile now had control of the conversation.

Jacqueline intervened to return the floor to Sharon. As Sharon began to speak she said, “Some client are perceiving you as being late and unprepared on a regular basis and they are being very vocal in their frustration.”

There it was, the kid gloves moment. Now, when something happens and it appears to be a one-off, many managers, myself included, will use passive-voice, buffer phrases like “it was perceived by” to reduce the negative impact on the employee and make them aware of the issue so it can be remedied without any major issues. This technique inadvertently shifts the blame away from the employee, so they don’t feel attacked, but instead become conscious of the action so not to repeat it.

Given all the information such as previous warnings and write-ups, data, and continued complaints about the same behavior sitting in front of Sharon, this was not a kid gloves moment.

No sooner than Camille heard that excuse, she once again launched into why none of this was her fault. Sharon, once again, lost control of the conversation.

At this point, Jacqueline interrupted to say, “This is not an issue of perception, in fact, this is not our clients’ issue at all, as it has been ongoing for two years now, this is an issue Camille must address and fix.”

Camille went quiet instantly, dropping her head down and peering at the survey in her hands as though she was reading the client feedback. From that position, she muttered, “I understand.”

While approaching a conversation with kid gloves when delivering harsh or negative client/customer feedback is helpful for isolated incidents, it is important that we are honest and clear on expectations when the issue is an ongoing pattern. Phrasing a one-time incident in way that alleviates stress, such as “the client perceive you as late/unprepared/disorganized/rude, etc…, but we know your professional performance and that this can be easily fixed/avoided next time by doing this …” is a helpful way to let your employees know they are supported.

Was Camille likely disheartened by Jacqueline’s frankness? Sure, but was Camille taking responsibility for the negative impact she was having on her colleagues, the clients, and the organization or making efforts to fix the issues? Absolutely not.

It is not our job to manage the feelings employees have about their negative patterns  or recurring client complaints, it is our duty to be honest with them so the issues can be resolved and lead them, by example, in a better direction.

What would you have done if you were Camille’s client, colleague, or direct manager?

Join the conversation! Leave your comments, questions and feedback below.

Suggested books on this topic

The One Minute Manager Meets the Monkey 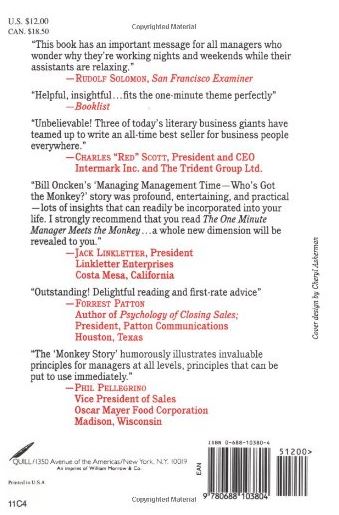 Shifting the Monkey – The Art of Protecting Good People From Liars, Criers, and Other Slackers 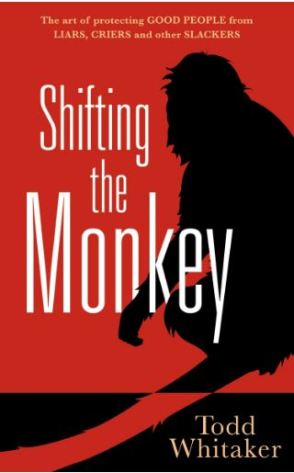 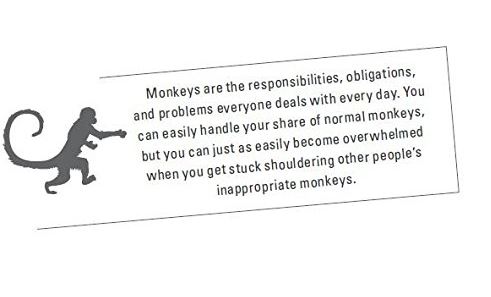 Gwendolyn is a lover of travel and culture, having visited over 13 countries and having lived most of her adult life in Europe and Asia – where she explored, learned, and fell in love.

In her professional career she has worn the hat of director in International Education, professor, trainer, strategist and fundraiser for nonprofits. Most recently she started lifeinherent.com and co-founded Laifeu LLC.

* The scenarios presented in this series are not meant to represent any specific person(s). They are real situations, though the names are fictional, and are intended to help us better relate to the problem and learn how to lead ourselves and others through like issues.

The concept and reference to ‘monkeys’ comes from the Harvard Business Review writings of William Oncken Jr., and Donald Wass (HBR, 1974). The concept was then covered by multiple writers as mentioned in the suggested texts. The term and use of the term Monkeys is never as reference to people or individuals, the monkeys are the issues, problems, and burdens created.

Read the Latest from LifeInherent